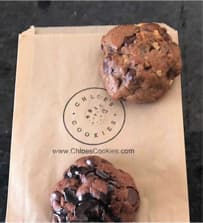 While visiting their two sons in New York City, Ken Weiner and Sheryl Weiner found themselves sampling a lot of chocolate chip cookies around town. In each case, Mr. Weiner would say, “I can do better.”

So when the couple returned to their Fort Myers home, the long-time hobbyist cook and baker broke out his equipment and started experimenting until he landed on a recipe that he thought worthy of testing. He took it to his friend, chef Harold Balink, the eponymous owner of Harold’s Restaurant.

“My grandmother. That’s the first thing I thought of when I tried them,” Mr. Balink said. “Brought me back to her kitchen, staring into the oven, pestering her to hurry up cooking them!”

He offered them in his restaurant as dessert. Customers loved them.

And so Chloe’s Cookies was born. The company is named for the couple’s rescued Dalmatian, a 13ish-year-old girl who is an affectionate pup who happily accompanies Sheryl Weiner for pet therapy at Golisano Hospital.

When he isn’t running his real estate company, Mr. Weiner is baking some of his 15 varieties of chocolate chip cookies. There are the regular chocolate chip, then those with oatmeal and caramel, walnut ganache, a vegan variety, double chocolate sea salt and others, some of which are seasonal. All are a hefty 4 ounces and loaded with chocolate chips. There gluten-free varieties as well.

I suspect there are some other secrets he isn’t sharing but he did share his cookies and they are outstanding, as much chocolate chip as they are cookie, and deeply satisfying.

At the moment, the Weiners have no storefront so you can order them for delivery (with five days’ notice). You can find them at some events around town and they will have a spot at a Naples farmers market starting in November.