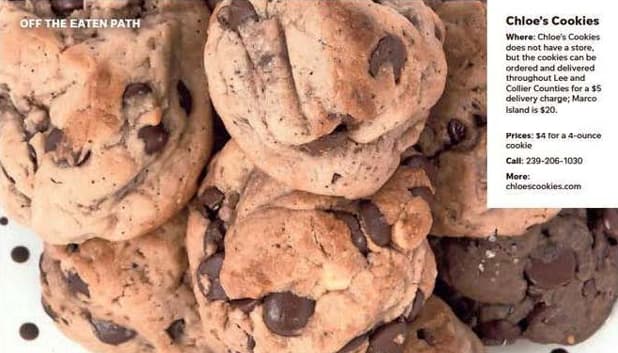 Ken Weiner slid the box of cookies across the table like a man passing over a tray of jewels. The cookies inside looked like specimens of fine artistry. But Weiner shook his head at the notion.

Even if Weiner denies it, he’s a craftsman who’s passionate about his material—which, in this case happens to be cookies. Weiner launched Chloe’s Cookies with his wife, Sheryl, last summer, and since then his small-batch chocolate chip cookies have been earning a lot of praise.

In the summer months, Weiner features berry-infused chocolate chip cookies such as raspberry and blueberry, and he’s working on a cherry. This month he’s also highlighting a banana cookie. Chloe’s does pumpkin flavors in the fall, and at Christmastime it’ll feature a peppermint cookie.

The inspiration behind Chloe’s came during a trip to New York City in 2018. Weiner and his wife and sons were walking down the street, eating cookies, when Weiner looked at the cookie in his hand and said “I think I can make a better cookie.”

He came home and began experimenting with the recipes until he hit one that felt right. He had friends taste-test his cookies over and over again until they were perfect, and then he started getting the same response. His cookies were good enough to sell. (This kind of intense focus on a project is very much Weiner’s M.O. Just ask him about his corned beef.

Weiner called up his friend Harold Balink, chef-owner of Harold’s south Fort Myers and asked him: “Will you sit down with me? I’m making cookies, and I’m no expert in this filed, but you are.” The two met and talked, and Balink tasted the cookies. His response? “I think you can sell these cookies all day long.”

Balink offered to feature Weiner’s cookies in his restaurant over the summer, and each week he gave Weiner feedback on what customers thought. Weiner took that feedback, returned to his kitchen and refined his recipes. By the fall, he was ready to begin testing his cookies at farmers markets around Southwest Florida. Word quickly spread about Chloe’s artisan chocolate chip cookies. Then, just before Valentine’s Day, the cookies were named Best Chocolate Chip Cookies by a local magazine.

“We were just plugging along,” Weiner said, “and then the phone started ringing.” His little cottage industry had suddenly become a big deal.

Weiner calls himself the company’s CO0 — that’s chief baking officer — while his wife is CEE (chief everything else). Chloe’s doesn’t have a storefront operation, so Weiner delivers his cookies. The delivery fee is $5 for Lee and Collier Counties, and Marco Island is $20. He’s currently working on plans for future projects, including a beer and cookie pairing with Millennial Brewing Co. in downtown Fort Myers.

And that sweet-faced Dalmatian who appears on the promotional materials for Chloe’s Cookies? She’s inspired by the Weiner family dog, Chloe, a rescue Dalmatian who does pet therapy at Golisano Children’s Hospital and through the Children’s Advocacy Center.

“She’s a very sweet girl,” Weiner said. As sweet as his cookies? “Definitely.”